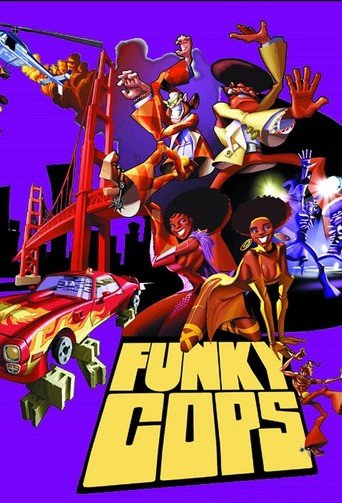 A 1970's cop show inspired spoof that records the misadventures of two undercover agents on the police force who become stars at a San Francisco disco scene.

this show is an all to rare gem that when it was on the air it existed in the ocean of garbage shows that somehow manage to stay on the air.

i mean how often is it that by just watching your favorite show you can relive your glory days as the disco king or queen of the dance floor?

its not how old you are its how young you feel at heart and your never too old to shake your groove thing and strut your stuff when it comes to taking a trip down memory lane while watching this show. the bee gees, the disco dudes, this show has it all homages to some of the best shows that were on back in the day. good disco music and plenty of cop car chases with fuzzy dice and classic music mixed in.

for anybody who was around to enjoy the disco 70's back in the day this show is for you. me i figure the 70's had its best and worst of times just like any other decade. but when it comes to this show it really does succeed at doing the disco 70's justice. this show brings the 70's back in a way i never thought possible it really does pay tribute to the best of disco in its way and the elvis episode long live the king is to die for. it really captures the tragedy of the kings demise even as it spoofs him with the character aeron king.

extra thought definitely went into that episode when it comes to the show playing lyrics from elvis's amazing grace during the funeral parade and cemetery scene. the show really paid tribute to the man with that episode.

they even spoofed don king in the episode king of the ring.

this show rocks. Funky Cops is a hilarious show that spoofs old cop buddy TV-shows. Ace Anderson and Jack Kolawski are partners that are like brothers to each other and they are on the San Francisco Police Force and they like disco and to boogie! Because when those guys are on the street there isn't going to be any rock 'n' roll! There is going to be disco. This show kind of reminds me of Starsky and Hutch almost since that show was also taken in the 1970's. I think it's funny how these characters are solving every case in a funny way.

BOTTOM LINE: WHEN YOU WANT DISCO WHO ARE YOU GOING TO CALL? THE FUNKY COPS!